The Dark Figure With the White Face

My best friend Alex was big on this urbex thing, or urban exploration. Sewers, tunnels, abandoned buildings, it was all fair game to him. That is, until the day he disappeared.

Now, I was pretty bad about knocking over things and I absolutely hated trudging through sewers full of, you know, shit. So I only went on a very few trips with Alex, sometimes with others. They were always looking for ghosts and spirits, but Alex always said he never saw anything, unlike the others. However, in the last week before he disappeared, he started talking about a "dark figure with a white face" that he saw more than once while exploring the abandoned Fairfield State Mental Hospital.

It was a complex of a dozen or so major buildings connected with tunnels. And Alex said that he saw The Dark Figure With the White Face in more than one spot. So did some of the others, who turned out to be too afraid to go back for a second encounter. The last time I saw him, Alex was trying to get me to go along with him to investigate. But Alex was gone.

I decided to go into the hospital to look for Alex. I had one small and one large flashlight. I figured the big one could be used as a club if I needed it. I was going in during the day, but the place was still supposed to pretty dark overall. That also meant I had to be careful to not get caught by the security guards.

I found the hatch that Alex mentioned that led down to the tunnel system. It looked padlocked, but the hasp was cut through so the cover could be lifted. I was surprised to find the tunnel was concreted and pretty wide. I was on my way up to the first building when I thought I heard a stuttering high-pitched laugh coming from somewhere up ahead. Was some other explorer already ahead? I was going to find out and pushed on.

Well, there was nothing but junk and graffiti in the first building I reached. There was glass everywhere, and counters. This was probably the laboratory that Alex mentioned. Then somewhere else in this building was also the morgue. As I was deciding to investigate that, I heard that laughter coming again from the tunnel.

Back into the tunnel system I went. I saw no one there, and continued on to the next building. It was some kind of residential building, really big. I was poking around the third floor when I heard that laugh again, very faintly. I zipped back downstairs and caught a shadowy figure ducking into the staircase leading to the tunnel system. I followed as fast as I dared.

Whoever was leading me around was pretty quick, but I figured that I could at least keep up. Sure enough, I kept catching glimpses of a figure ahead of me. At one point, it stopped and turned to see how close I was. It was The Dark Figure With the White Face!. No question. I turned on the speed at that point to follow it up into another building.

It was another residence hall, again with a large open central area. By the tunnel exit there were two chairs, so I put them inside the doorway to trip up whoever or whatever might try to reach the tunnel system. Huffing and puffing I walked into the central space. Now I could hear someone or something breathing hard on the other side of the space.

The Dark Figure With the White Face walked slowly out of the darkness to where I could see him. 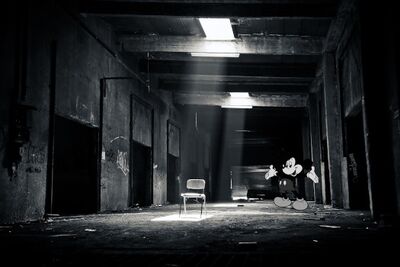