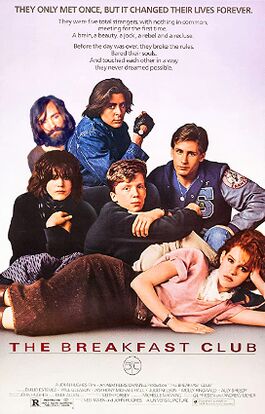 The Breakfast Club is a movie about a bunch of high school kids in detention. If you've ever been there, you probably wouldn't bother to see it since you've already had that experience. If you are in jail today, you are also living the experience. So why would anyone want to see this movie?

It has all the stereotypical characters doing all the stereotypical things expected of sullen and rebellious teens. There is the jock who secretly wants to be an artist but is too strong and keeps breaking his paintbrushes and ripping his tutus. There is the misunderstood sensitive artist/emo type who will go on to become a stockbroker looting customers accounts. Then there is the genius kid who will end up living in a dumpster in the back of a Wal-Mart. They are all left unsupervised by a vice principal that was a former prison guard at Guantanamo Bay who probably allowed everyone housed there to escape, based on the events in the movie.

Now you'd expect with this volatile mix, there would be constant screaming and fighting in detention. And there pretty much is that, except it doesn't lead to fistfights and shootings. So, yes, this is pure fantasy. At the end of their stay in detention, they remain the same irritating kids they were before, and the vice principal "accidentally" has them all transferred to Abu Ghraib prison.