The Ancient of O's

The Ancient of O's is an apostle of the Flying Spaghetti Monster and is a key figure in the FSM church. 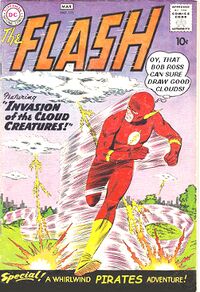 , there once was a group of pirates burying treasure on an island remote.

Returning to the beach, they discovered their ship was taken away by currents strong and winds powerful. And the pirates said unto each other, "Fucked we are and fucked we shall be." Without foresight, they had chosen a place where fruit there was not, nor wildlife. One most brave named Mikey was convinced to try a few leaves and bugs, resulting in much choking and barfing. Two pirates then waded out into shallow water to try to capture a dolphin they had spied that looked fat and toothsome. But lo, a shark it was, and the mighty fish became fatter still. Unable to catch any fish they were, for they had left their licenses and tackle aboard ship. The group sat down to starve. The pirates had read about the joys of cannibalism in some books that were looted from somewhere, but tempted they were not. The sun soon set on this group most forlorn.

ON THE SECOND DAY, there was much recrimination and gnashing of teeth, about everything yet nothing in particular. This turned into reminiscences most sweet about foods they had heard about but never tasted. This only made them hungrier still. More leaves and bugs were brought unto Mikey. But the group was disappointed to find "Mikey no likie".

ON THE THIRD DAY, a ship appeared on the horizon, headed for the island. It shone like silver in the sun. The sails had crosses upon crosses upon crosses upon them, as did their flags most colorful. Its crew was all dressed in silvery armor. The pirates as one assembled on the beach to greet their visitors and rescuers who landed in silver boats loaded with fruit and hams and wine. These people in silver walked past the pirates and fell to their knees and claimed the island for Spain and God. 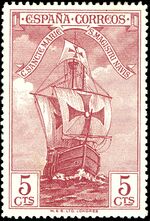 Told they were by the silver leader that the pirates were now slaves and were to begin mining gold immediately. When told there was no gold on the island, the silver leader demanded tribute as he was their monarch now.

Obliging the pirates were, who went to dig up their treasure and present it unto the leader in silver. They open the chest in front of him, revealing great books of scientific knowledge, Ming vases, and comic books most rare. The leader screamed "Blasphemers!" and had his men immediately destroy the treasures, deeming them ungodly. The pirates realized this man was an ardent Christian and apologized most profusely. However the leader in silver refused the apology of "heathens and suspected Jews" and tried to have every pirate burned at the stake. But the pirates were saved from that fate most horrible when not enough dry wood could be collected on the island entire.

Resigned to their fate, the pirates asked for food before being sent to mine for gold. But lo, they were refused again as heathens. And so, the pirates were sent into the wilderness while the men in silver feasted and laughed. The next morning, the awoke to find the men in silver and the silver ship gone. All that was left were paper plates and cups most filthy littering the beach, picked clean by seagulls earlier in the morning. Plus they found a parchment stating to be title to the island with the pirates' signatures forged as well as bills for 40 pounds of gold written for each. A saddened but relieved group there never was.

ON THE FOURTH DAY, another ship appeared. This had a hull that gleamed in gold, with sails of gold. Many flags fluttered from the masts, all BOGO coupons of various kinds. Just one person landed this time, and it was seen to be Satan. He smiled most warmly, walking toward the pirates with a turkey under each arm and pockets filled with cranberry sauce cans and Parker House rolls. He called out, "No vegetables have I, for I come in peace." As he stood before the pirates, the one called Mikey asked of him, "Aren't you something that was made up in the 4th century to try to keep Christians in line?" At that, Satan vanished along with boat and ship and cranberry and the pirates were alone on the beach once again. 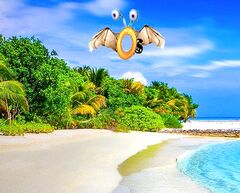 ON THE FIFTH DAY, every pirate was looking at the clouds, imagining they were blobs of self-serve vanilla ice cream from Golden Corral. A dot appeared in the sky and grew larger and larger until a flying figure appeared above them, hovering and backlit dramatically by the sun. When the creature most mysterious was asked to move so the pirates could see to whom they were talking, it apologized and moved out of the sun. Here was a wondrous being, with huge wings and a round body covered in sauce.

And he said unto the pirates: "Hark unto me! An hour before sunset, no earlier and no later, the tide will go out revealing a sand bar that connects to what appears to be a volcano at the north of this island barren. Travel on the safety of the road to the far side of that mountain, and you will find what you seek. Ask for the one called The Boy Chef when you arrive. Do not be discouraged nor fear nought, for it is written that you will always be tested by yourselves more than anything else. Now go and await the proper hour. I leave you now, as I grow weary of arranging sentences into clauses as if I were speaking German or something." And with that, the creature flew off.

AND LO, at the time predicted, the seas parted and the group began to cross the sand bar. There was a sea snake upon the sand, with the one called Neville exclaiming, "I HAVE HAD IT WITH THESE MOTHERFUCKING SNAKES". With that, the unbeliever jumped into the sea and drowned. However, the rest passed the snake without incident. Upon reaching the volcanic island, their path continued on a fine but narrow road. Yellow it was and made of brick. As they traveled upon it, the one named Brett convinced his friend named Byron that ahead of the group they should race. However, jostled each other they did while running and fell off the path into the sea to their deaths. Byron cried out, "Check out the big brain on Brett!" before disappearing beneath the waves. Thus, prophecy was fulfilled which foretold that "the path of the righteous man is beset on either side by Samuel L. Jackson quotes".

SO IT CAME TO PASS, the pirate crew reached the far side of the island volcanic. There they espied a security guard seated at a counter most regal. Upon their approach, the guard stood and began shouting mightily, "Go away!! You have no business here, no way, nohow!" However the pirate leader called Norman asked to see The Boy Chef, and that a winged creature harkened them to do so. Large as saucers the guard's eyes grew and he spoke into his intercom. Announced he to the group to go right in as they were expected. 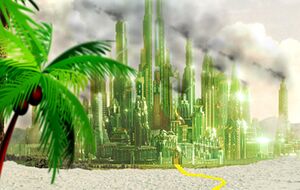 AND LO, the pirates could see this was no castle of emerald color but a factory impressive in its own right. The smoke they had seen and thought came from the volcano actually came from smokestacks great and forboding. Swung open did the building's massive doors, revealing a young boy garbed in a Pokémon T-shirt.

"Hewwo and welcome!", said he, with a smile as bright and cheerful as the Sun. The pirate named Phillip fell to his knees and cried, "Mr. Fudd!, we are in your debt and at your mercy!!" The Boy Chef spoke again. "Naww, siwwy! My name is Wichard David, but you can aww caww me 'R.D.' Come this way, pwease." Thus prophecy was once again fulfilled: "And a child shall lead them". The pirates followed him into a massive dining room most elegant. There its table not of IKEA had thirty and seven seats, enough for all. Each seat was set with a charger most splendid. Next to each charger was a spork as white as snow. Upon each charger was a large steaming bowl of a spaghetti-like substance.

Came the fateful day and the pirates boarded the ship, with promises to the Boy Chef to exchange Christmas cards most humorous and to continue enjoying the spaghetti-like substance. Upon leaving the island, the first mate revealed unto them that the captain named Francesco Schettino was shacked up somewhere with a bimbo and was not aboard withal. He then asked of the pirates if he could become one, too, and also partake of the spaghetti-like substance. So as pirates all, of the ship they took control yet still delivered their cargo as they had become a group most humble. However, not so depressed were they as to not attempt the greatest piracy of all: cruise ship operations. And lo, converted the ship was for passengers and named The Big O in commemoration of their deliverer and deliverance.

THE WRITINGS THEN TELL US that the pirates most clever then advertised their cruises to the lands of the United States Midwest and Northeast. To spread the word of the Ancient of O's by serving the spaghetti-like substance every day was now their lives. Aware they were that those folk also were those who were already big eaters of the spaghetti-like substance, and in more ways than one. Upscale to their passengers the dish was made, with ingredients like a sprig of parsley on top or a bay leaf stuck in making this appear most exotic and exciting. The pirates then made the dessert menu as large as the sky and sea combined to avoid any complaints. Fortunate in being sailors most expert, the pirates also knew how to compensate for the added weight as passengers grew fatter during each voyage.

THUS ENDS THE TALE of the Ancient of O's, the sacred spaghetti-like substance and pirates, to be remembered everlastingly, for ever and ever. And mercy upon the Kansas State Board of Education, for they know not what they do. Ramen.