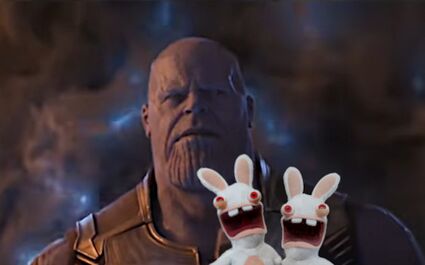 Thanos being photobombed by two of his henchmen.

Thanos is a chunky dude with a mission.

And that mission was to wipe out half of the population of the universe, apparently to impress a girl, Mistress Death, and also help out the mortuary industry. Job done. He is the perfect CEO, the overly talky frontman who's always available to the media and who gets all the credit for doing the task. Meanwhile, he delegated his minions to do all the heavy lifting, bringing these so-called Infinity Stones from various places to him.

However, Earth-based analysts noted that wiping out 50% of all Earth people was "half-assed", causing Thanos Corporation (NYSE: THC) stock to rise only 4 points, far underperforming expectations. They cited his history of always doing thing by halves, even noting his regular use of half-and-half in his coffee. Rival CEO Galactus generously stated that "he appreciated Thanos leaving something for him (Galactus)" and looked forward to working together on similar projects in the future, if there is a future.

With the extirpation event televised live on television, watchers sent confetti sales through the roof. Thanos was praised by the environmental groups that were still left for converting that confetti into recyclable dust.