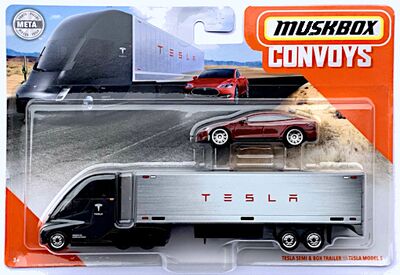 Every delivered Tesla Semi will be blister packed for freshness. Note that as advertised, it would allow other Tesla cars to hover above it.

The Tesla Semi is a battery-powered semi-truck brought to you by Elon Musk and his minions.

It was announced with a prototype unveiled in late 2017 to the usual fanfare. This time, Musk didn't sledgehammer any windows to pieces. Awwwwww. This vehicle would have the standard Tesla features: a cool design and not-quite-self-driving tech. Its range would be 500 mi. (800 km.) 400 mi. whatever on an 30 minute charge from a still-nonexistent new charging system guaranteed to collapse the electrical grid. The windshield is explosion-proof but has not been proven to be Musk-proof yet.

the first real one was supposed to be released in 2021. Though people were out searching, it was not anywhere to be found with the explanation that there were not enough batteries being made by Tesla to be able to do that. Translation: the dog ate my homework. Musk then announced that the target would be late 2021. Nuh-uh. The rollout date was pushed back to 2023. For those who understand Musk-speak, The original date actually meant "sometime in the 21st Century unless the critics stop jumping all over it so that we take all our toys and go home".

For its planned range and hauling ability, nasty old critics point out the truck is also hauling its own batteries. Heavy batteries. Based on the range predicted, that gives one estimate is 25,000 lbs. (11,800 kg.) for the batteries alone. So, the load the Tesla Semi could carry would be 2/3 that of diesel-powered rigs. Good news in that all deliveries of bags of popped popcorn would be zero-emission assuming the driver could make himself/herself weightless and remembered to leave the hand truck at home.

The big question is not whether this is all vaporware or not. The real question is why people still believe whatever comes out of Elon Musk's mouth. Yet they are skeptical about minor things like (say) reality. Tesla Cybertruck, anyone? Musk's abilities as a hypnotist are well known, but some have noted that the zipper in his back may be hiding two Giant Space Raccoons of the 8th Dimension inside a Muppet.