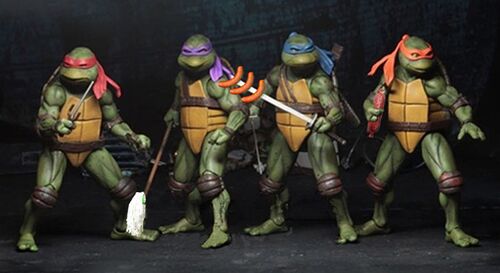 The Teenage Mormon Ninja Turtles (TMoNT) is a group of crime-fighting mutants. There are four of them and all have names, but visually they are indistinguishable from one another. So nobody cares who is who, even themselves.

They all began as normal Mormon children, living middle-class lives in suburbia. The only thing they had in common was having turtles as pets. However, the turtles were infected with radioactive salmonella and the kids changed into turtle-like mutants. The church contends they had to be excommunicated to protect other children, but the ninja turtles insist it is because one of them was gay and another tried to turn in a priest who tried to molest him. The other two were thought to have been thrown out for being impolite while also being green without prior permission.

Thus they were unable to even associate with other Mormons and each moved to New York City, meeting each other at a pizza joint. Scrounging in dumpsters for discards after using up what little money they had, they were befriend by a rat doing the same thing. This was Splinter, who had contracted the same bacteria from his pet rat.

Splinter graciously opened his home in the sewers to the turtles, who naturally weren't too keen on living there. But after seeing the cost of rent in New York City, they agreed. There, he taught them ninjutsu to protect themselves, and had them watch Chuck Norris movies day and night. Soon, each became adept at using one of several improvised weapons stolen from a defunct Brazilian barbecue restaurant: nunchaku made from two hard salamis and a necklace, the standard Brazilian long meat skewer, a pair of BBQ rotisserie skewers and a long mop handle.

However, all that training failed to teach them anything about the real world. For example, each of them bought the Brooklyn Bridge, one of them buying it several times for some reason. They were often suckered into 3-Card Monte games on the street. They bought all their various turtle accessories from street vendors that quickly broke or never worked in the first place. And don't even ask about their fundraising for Scientology in the mistaken belief they were helping fellow mutants. While they blended in with typical New Yorkers, they would be singled out for constant ticketing by New York cops (NYPD) for public nudity and being an ugly shade of green.

Finally they could no longer tolerate such crimes. Taking their inspiration from the Guardian Angels, the group decided to take to the streets as vigilantes. They all wore masks to disguise the fact that... never mind. Ironically, they would often get attacked in the projects by the Guardian Angels with both being lured by fake police calls made by members of a coalition of street gangs known as the Foot Clan. Since the latter watched all the Kung Fu movies they could, they were also self-styled martial arts experts that could be huge posers just like the Turtles.

Their most powerful foe would turn out to then-mayor Rudy "Shredder" Giuliani. He blamed them for the collapse of the emergency center in the World Trade Center complex by jumping around on its roof and causing critical damage. During a boss battle with the Turtles, he slipped on a Book of Mormon dropped by one of his foes, fell from a building and died. However, Shredder was brought back from Hell and went on to become an evil political consultant.