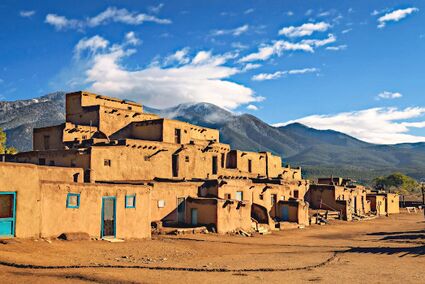 The Taos Hum is a sound bugging a number of people in that New Mexico town.

It has been reported to be not only a humming sound, but also a whirring noise or buzz. Even after Taos residents who had never seen an airplane or bee were weeded out (50% of the population), there were still people left claiming they could still hear the sound. Not everyone can hear it so the hearers have been rounded up and locked into an abandoned mine for the public's safety.

Initially, wild burros living in the desert outside of town were found playing harmonicas discarded by tourists. However, when brought in for questioning and torture, it was found that their poor Chicago-style blues musical attempts were not what people were hearing. The burros were then made into barbecue for tourists since Taos natives are generally End Times believers who prefer human flesh.

Meanwhile after years of this, researchers found the obvious answer right in front of their piggy little faces. They found that Gray aliens and other extraterrestrial species singing at alien church were the source of the Taos Hum. While aliens have been around New Mexico since the 1940s, the Taos Hum has only been heard since 1979. So after further questioning, it was found that the Cocteau Twins band was an alien favorite because of the ethereal but obtuse vocals by singer Elizabeth Fraser. However, aliens are not sopranos and not particularly good singers so the best they could do was make limited droning sounds even with Autotune correction. And no words were ever sung because, as Cocteau Twins fans know, nobody really knows what Fraser is ever singing.

Today, tourists flock to Taos trying to hear the Hum. The natives will meanwhile play along and pretend not to know where the sound is coming from. Taos has become the third wealthiest town in New Mexico from selling earplugs to visitors who have convinced themselves they can hear the Taos Hum.