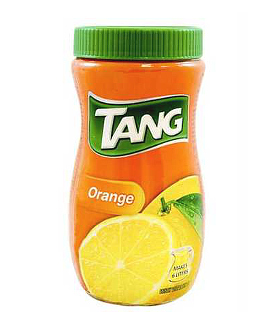 It is unknown if this is one of the trophies or just a regular bottle of Tang.

The Tang Prize is a prestigious annual award given for the use of the powdered orange-flavored drink, Tang. It has been in existence since Tang first appeared in 1959.

The Tang Prizes are awarded on television, frequently booked on an infomercial channel at the same time as the Academy Awards are being shown. The awards committee has carefully chosen some very prominent figures to host their gala event. Unfortunately, their selections have been considered to be quite controversial, like Rasputin and Fidel Castro, who were in addition dead at the time they were selected. No matter, as Gilbert Gottfried's cousin has stepped in every year to fill the gap.

The awards show is quite brief, since nobody has bothered to nominate their efforts since 1960. While the Tang Prize committee is rather disturbed by that fact, they concede that the prizes, currently $3 for each category, might have something to do with that. Plus winners are given an 8 ounce bottle as a trophy for their achievements, so one would think that that alone would be a reason to enter.

Meanwhile, Tang continues to go on and on. Tang fights are often held on the International Space Station when astronauts get tired of drinking the stuff. The recent Tide Pod challenge is directly derived from people who still try to eat Tang in a sandwich or something.