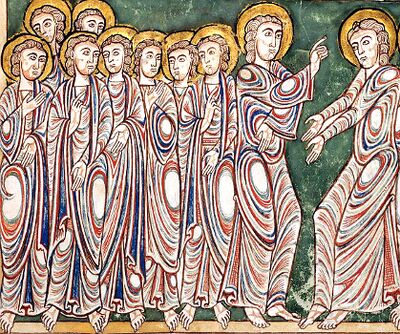 The Church of the Infinite Swirly only lasted for a short time, possibly because its followers were constantly dizzy.

Day after day, alone on a hill, Clyde of Antioch stared up into the heavens. He was looking for a sign whether to join the Christians or the Muslims.

At night, he would watch the stars go around the star Polaris. When he went home to take a bath he watched as the [[water drained in the emptying tub. He watched a whirlwind cross the fields and disappear. Clyde then had an epiphany before any damn Born again Christian would. And that was recognizing that everything was based on the swirl, things going round and around, all the time, all around us. Clyde would then set out to start his own Church of the Infinite Swirly to worship that phenonemon.

As prophesized, Clyde was ignored by his friends and eveyone in Antioch. They told him that he probably had a bad batch of mushrooms and should go lie down. Either that, or some thought he had found some psychedelic mushrooms and wanted to know where he found them. A dejected Clyde then wandered in the desert for forty days and forty nights like he was supposed to, but all he found was more swirly things to talk about and irritate the people of Antioch.

Then, Clyde had another epiphany, which he was becoming rather good at. He would show everyone how important the swirl was. To show up the Christians who had just the one carpenter among them, Clyde of Antioch hired nine carpenters and set to work on his project just outside the city for two years. When finished, he invited the people of Antioch to visit his temple.

This was the very first carnival in history, with his carpenters now the ride and concession operators. The roller coaster circled the perimeter ia a large swirl. The first merry-go-round was present as were other rides that went in circles. Children could buy whirligigs. Food was available: funnel cakes, cotton candy and curly fries, all made by swirling or made into a swirl pattern. There were even large lollipops with a swirl pattern. Clyde had thought of everything, including providing sinks with running water for vomiting after too much food and rides. There, visitors could contemplate their mortality while watching their barf circle the drain. The carnival was a big hit and soon became a popular weekend destination. It also became a big moneymaker for Clyde and his carpenters.

However, watching on the sidelines were the fanatical Christians and fanatical Muslims who disapproved of frivolity and money being spent when it could be flowing in their direction. So, for the only time ever in history, Christians and Muslims got together and destroyed Clyde's carnival and burned Clyde and his his followers at the stake. They then went out and killed thousands of Jews for not thinking of the idea first and telling them.

Just remember that the next time you ride a roller coaster or a merry-go-round, you are being a heretic and are going to burn in hell.