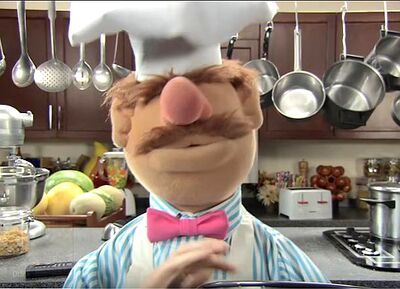 The Swedish Chef hosts a popular cooking show on the PBS network.

With the retirement of Julia Child from her television program, PBS executives were desperate to replace her, as they only had eight other cooking shows running at that time. Without it, the network would have to have a different type show in its place, with yet another road repair or home self-surgery show being too much for the the viewing public. The PBS cafeteria chef was pressed into a replacement show and proved to be a success, despite not speaking English and turning out to be the busboy, Vladimir Ilyich Lopez-Kawasaki.

The program became controversial when the local health department found animals constantly running through the set. However, PBS was exonerated when it was found the animals were just Swedish ninja assassins sent by the Swedish government to stop the Swedish Chef's poor imitation of its language.

Nonetheless, with secret kickbacks coming in from IKEA, the network continues to run this program that never seems to present a completed dish.