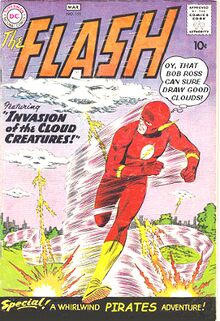 ~ Prince Philip of the United Kingdom

Superfied lightning is a specific kind of lightning that can even kill superheroes.

It can come in any color, and strike at any time of day. Unlike with standard lightning, tinfoil hats will not repel a strike even when connected to a heavy grounding wire. Doctors have noted that people struck by superfied lightning have an intense episode of verbal diarrhea before dying. Russian strongman Vladimir Putin took a direct hit and is the only survivor known to date. The only aftereffect was a string of garbled televised speeches after which several strange laws were enacted. One speech authorized the invasion of Calumet, Colorado (USA), which Russia still controls.

Superfied lightning once grazed Superman's cape just slightly, and he had to pay for an expensive reweave job. It is completely out of the control of the mighty Thor and he must avoid accidentally summoning it at the risk of frying himself. When conditions are right, it can reach into the Happycat Dimension. ConEdison continues to experiment with superfied lightning and has paid the price with several major power outages in the US Northeast.

A key to identifying whether clouds can generate superfied lightning is to see if they have faces. If they do, RUN LIKE HELL!!

Follow the White Rabbit
Will the universe be changed one bit if you do? Probably not. The dark hearts of coatimundis? Maybe. But your reflection in the mirror? Oh, yes.
Retrieved from "https://wackypedia.risteq.net/w/index.php?title=Superfied_lightning&oldid=163662"
Categories: