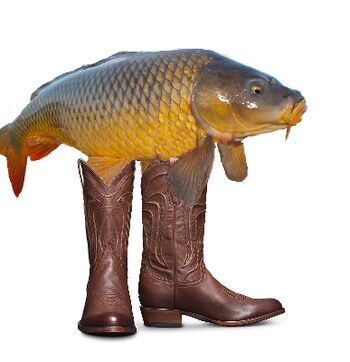 A stylish carp strutting its stuff. Stay clear and watch your feet and shins

The Stomping Silver carp is an invasive species that has been brought from Asia to the Americas.

Originally, these were Silver aka Bighead carp that are well know for their size and their jumping ability when disturbed by boats. However, they are a danger when they jump and hit boaters and fishermen. They are a typical invasive species with no predators, crowding out native fish and even each other. So much so that some have left the water.

This variant found lost shoes by the shores of rivers and lakes and used them to walk on land. Originally walking around with mismatched shoes, these walking carp were mocked by humans for their bad style sense as they roamed on land. However, the fish are aggressive and soon began shoplifting from high-end shoe stores. Thus, the carp are now seen wearing Christian Louboutin heels in New York and Tony Lamas in Texas. Curiously, they are often living the high life, known as high rollers in casinos and seen at the trendiest restaurants. While there is no definitive proof, it is suspected that the carp are connected with and funded by Asian criminal gangs.

Despite suspicions, Stomping Silver carp have appeared on Dancing With the Stars and have controversially been allowed in Olympic running events wearing not only high-end running shoes but also cowboy boots and heels.