Stoats are animals of pure hatred. So are most human beings, but still. 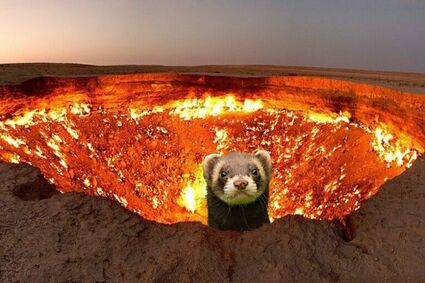 First of all, the object of their greatest hatred is dirt. They are always digging great big holes in it, then piling it up where where it doesn't want to be. The weaselly animals will eventually make the Earth into Swiss cheese, turning Florida into the sinkhole capital of the world. Sinkholes not only pwn humans but provide the pets and house contents to fulfill stoats' huge appetites. While people think the Bermuda Triangle is a supernatural phenonemon, it is actually caused by stoats tunneling through the sea floor, creating whirlpools that suck down unsuspecting cruise ships so that stoats can feast on their huge buffets.

Further, the energetic animals can't stand anything that might be considered competition. They will hunt down and destroy old Dig Dug and Minecraft game cartridges. They detest Elon Musk's Boring Company even though it hasn't done much of anything. You might notice that Elon Musk is always seen standing on a long steel girder; this is to prevent stoats from tunneling a hole under him and carrying him off to god-knows-where. After all, Musk's experiments on his employees have shown that stoats can completely skeletonize a human being in just 20 seconds.

This behavior is a recent one. Scientists have determined that due to watching too many TV cartoons, particularly those involving the Tasmanian Devil, stoats' already aggressive natures were amplified many times. This also taught the animals to spin to quickly dig ever-bigger tunnels. Throw in their heavy use of energy drinks, and there you have it.

Happily, stoats have made it possible so that global warming/global climate change won't be a problem, since we'll all be dead before that fully kicks in. Stoats plan on creating a hollow Earth, pwning Flat Earthers in the process, where they can raise their favorite food, dinosaurs. Then, they will tunnel to the planet's molten core, bringing lava to the surface and eliminating all life there. The dinosaurs will then repopulate the cooled surface and stoats will become Masters of the Earth. No plans have been made yet to conquer the Giant Space Raccoons of the Eighth Dimension, but just you wait.