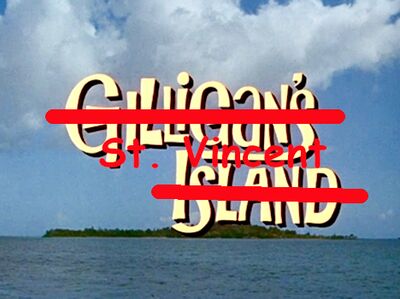 St. Vincent renamed itself upon independence. It was immediately censured by the UN for using Comic Sans.

St. Vincent and the Grenadines are islands in the Lesser Antilles in the Caribbean. Wherever the hell the either of those are.

The main island is equally divided between supporters of St. Vincent, the American female alt rocker, and St. Vincent, the French male black metal artist. However, the official head of state is The Queen with the power of life and death over everything on the nation. In fact, she would normally smite the Grenadines into dust for bookkeeping purposes, but her love of St. Vincent-grown bananas keeps her from doing just that.

Its population is mostly poor with residents renting themselves out as shark bait to make ends meet. They would become boat people except that they have found that boats cannot be made from bananas and be expected to float.

Since the main island looks so much like any other tiny island country in the Caribbean, even UFOs don't visit very often. Therefore, aliens cannot be blamed for any criminal activity in St. Vincent. Instead, levitating ninja cows stole my kidneys.