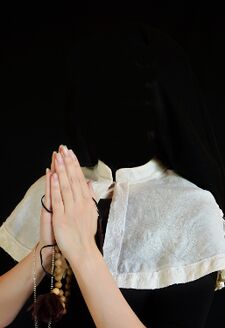 Members of the Order of St. Osyth take a vow of poverty and promise not to run off with the Headless Horseman.

St. Osyth or Osgyth was a typical obscure English abbess and martyr from the Dark Ages.

She earned her stripes when she ran into a gang of Vikings. Invited to take a boat ride, she refused and was beheaded by the insulted raiders. She then picked up her head and scampered back to her convent with it, slipping tackle after tackle. Frustrated that she could not call out to the others in the abbey, she expired on the doorstep. In reality, the other nuns saw her coming and were afraid she would make too much of mess if they let her in. Out of guilt, they made her a saint, even though religious types running around headless was nothing special back in the Dark Ages.

Today, St. Osyth is the patron saint of running around like a chicken with its head cut off.