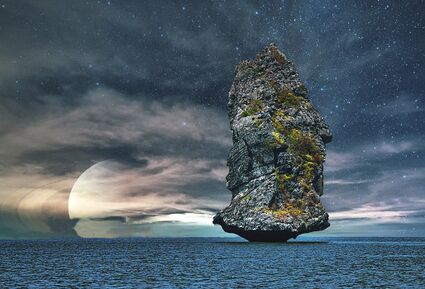 St. Helena is a dot somewhere in the middle of the South Atlantic Ocean. Exactly where is anyone's guess, not that anyone really cares.

Dusty old records show that it is a tiny island claimed by the British. Over the years, the United Kingdom lost track of the fact that St. Helena was their possession. Due to recent findings, the island was discovered to still be part of the British Empire. Huh. The Queen had mixed feelings about hearing this, since it probably meant more mouths to feed. Researchers are now working with old maps and satellite data to see if they can find it again.

It was recorded in several famous explorer's ship logs, who all denied discovering the place but "merely ran into some rocks in the middle of nowheresville" according to one of them. Eventually, a British ship got stuck in the rocks of St. Helena so the crew made the best of it, setting up a chip shop and pub. This diverted a lot of trading ships who needed their crews to get totally blotto before wandering off the edge of the Earth. The ships also attracted pirates, so the British Navy had to establish fortifications, forcing 1,257 pubs to close due to lack of room for the cannon, officers' cricket pitches and suchlike.

For those without comedic tastes, the so-called experts at Wikipedia have an article about this little dot in the middle of nowhere, or simply go here.

If St. Helena rings a bell, it is because of it being the second exile home of Napoleon Bonaparte. This was after trying to execute him by firing squad (they missed) (twice), hanging (the noose kept slipping off his tiny head) and trying to drive him insane by locking him in a room with a time-travelling Gordon Ramsay (almost worked). In St. Helena, he was given a nice cottage tastefully decorated with arsenic-laced wallpaper and served food laced with arsenic. He was allowed to smoke all the arsenic-filled cigars he wanted. Napoleon proved to be immune to the poison but finally died due to an allergy. The local coroner found that the former emperor had a "strong reaction" when several ten-foot-long sharks accidentally fell into Napoleon's bathwater one evening.

Today, St. Helena stands on guard for nobody in particular. It remains home to about a dozen birds, who have to take turns sitting in nests due to lack of room.

Islands in the stream, that is what we are[edit]