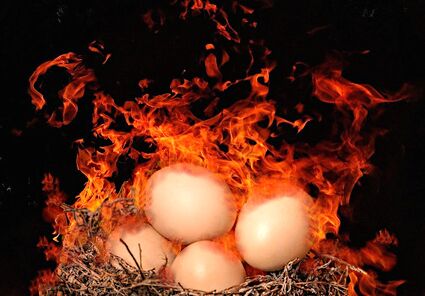 Very similar to the Scotch egg, Spontaneously Combustible Eggs have been used effectively as a method of population control since the dawn of time. They are mass produced underwater in Atlantiis (similar to Atlantis, only it was a city of women that sunk into the sky, (currently owned by ninjas)) by injecting chickens with the T-Virus and then reversing their life process until they return to their original form: gge (the first incarnation of an egg's 186 incarnations). They are then injected with the T-Virus, causing them to fill up with water, which is what causes the spontaneous combustion, as water is flammable. To stabalize the Spontaneously Combustible Egg (SCE), it is injected with the T-Virus. It is then coated with the T-Virus, (which the SCE has never had any contact with, as this would cause the SCE to turn into a Chinese rice farmer) and dyed in pretty colors. They are then distributed throughout the world on Easter by Santa Clause.

You searched for Spontaneously Combustible Eggs

There is no page titled "Spontaneously Combustible Eggs". You can create this page.

Showing below 0 results starting with #1.

Note: Unsuccessful searches are often caused by searching for common words like "have" and "from", which are not indexed, or by specifying more than one search term (only pages containing all of the search terms will appear in the result).

Just pretend that the rest of the stuff that appears at the bottom of an unsuccessful search is right here and the world won't be destroyed by The Floating Head of Zaza Du.