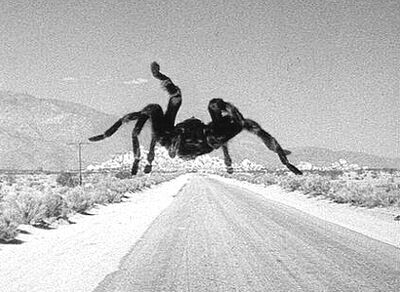 Giant tarantula twerking near Tucson, mistaking your van for a female tarantula. You are so dead.

Jumping spiders like flashy peacock spiders, emulate human dancers in British Northern Soul clubs, where males dance by themselves while females pretend not to notice them. They have a large number of moves with their jumping ability apparently developed through practice in front of a mirror. This ability is essential since spider females will eat lousy dancers, just like on Dancing With the Stars. Therefore male jumping spiders also have developed disco, EBM and ballroom dance moves all on their own to maximize success.

Despite all their fancy moves, most dances are unsuccessful in leading to mating. This has led to Arthur Murray dance studios opening specifically for spiders, with other species joining to become more socially active. Abandoned Air Force airplane hangars have been repurposed into dance studios for giant radioactive tarantulas living in the Southwest (see photo).