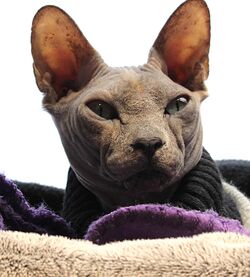 Doesn't anyone else think it's a little chilly in here? We're in Florida? So what?

Sphynx cats are weird-looking cats with no hair.

While some people say that Sphynx cats were the abandoned pets of Grey aliens, others say that the breed was purposely bred. Cat breeders that were of dubious breeding used inbreeding to create a bald wrinkly cat. Why they needed to do this remains a question because all kittens look like that when newly born; Sphynxes just stay that way.

The preferred almond-shaped eyes and wedge-shaped head make the cat look like an alien, and if the cat sleeps on your television set, it can actually improve reception while carrying on the outer space theme during Star Trek reruns. They are particularly friendly, able to scare the crap out of visitors who have never seen one before.

Now all this inbreeding causes more problems, like having to buy cat sweaters that meet the approval of the cat in question regarding style and color. The owner might be inbred too, to buy a bald cat and then cover up the baldness. Sphynx cats need to be bathed all the time, but fear not, Sphynxes will only bite and claw you for the first ten years before getting used to constant baths. And humans with allergies will assume that a bald cat is okay to own until they are told it is cat spit and skin oils that is the problem. Plus all that inbreeding causes many bad health problems, something that similarly inbred breeders should suspect of themselves.