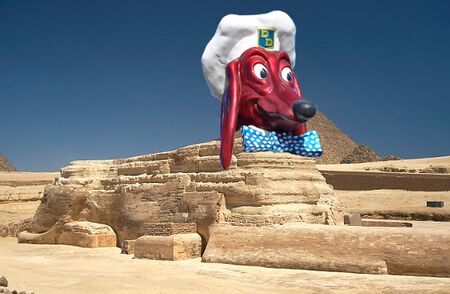 While archaeologists agree that this was the original intended look of the Sphinx, they disagree on the color and pattern of its bowtie.

There once was a time when people thought the Sphinx was a natural rock formation. Later, they thought it was built by ancient Egyptians out of the natural limestone bedrock. The truth turns out to be quite different. For the Sphinx was created during the time of the construction of the the pyramids, albeit not intentionally.

The pyramids and other structures never finished are now found to part of an enormous pinball machine made for the pharoahs. A giant ball made from imported rubber from the African jungles was to be launched by a gigantic spring, where it was intended to bounce among the pyramids. Each pyramid, purposely constructed to go *DING* when struck, would score a certain number of points. Priests would operate a giant scoreboard to track the score, similar to what modern-era pinball machines do. Like the more modern machines, the royal player could earn free games and tickets redeemable for junky prizes with a high enough score. Still, unlike the more modern games, body English could not be used.

Records show that bags of concrete were brought on site to build the enormous boundary walls and several game targets. They were placed in a huge pile in readiness for mixing. Unfortunately, a huge storm blew up dumping huge amounts of rain on the concrete. By the time the workmen came back, the concrete was nearly set. Seeing this, a group of high school students decided to use this in a prank on their hated principal Mrs. Hepshasut. They created a giant likeness of her beloved dog and placed it atop the concrete pile, and were able to carve the concrete into a rough body shape. Imagine everyone's surprised when they found this giant thing, now solid and immovable right outside Cairo. No records remain of the principal's reaction, but it is known that the students got two week's detention for the escapade.

At some point, someone recarved the dog head into a human one. While archaeologists have been sorting through royal mummies with broken noses, so far no match has been found to identify just who this would be. Meanwhile, the pyramids still go *DING* when hit, but you have to hit them just right.