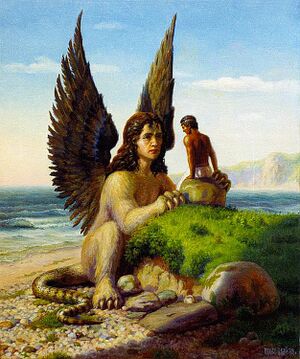 As Oedipus approached the city of Thebes, he felt a tap on his shoulder.

He turned and stared at the sphinx towering over him, a ferocious beast with the head of woman, the body of lion and the wings of an eagle.

"Hey, my eyes are up here," said the sphinx. "Your passport, please."

The king of Thebes replied, "Don't have one. Don't need one. I am Oedipus!"

The sphinx retorted, "Not good enough. You'll have to answer a few questions before you can enter the city. If you fail, I get to eat you. You do not have answer in the form of a question. Got it? So, which creature has one voice and yet becomes four-footed and two-footed and three-footed?"

Oedipus yawned. "It's Man: baby, adult, geezer with a cane. That's an old one."

The sphinx then started to speak again but was interrupted by Oedipus. "Waitwaitwait. Aren't you supposed to kill yourself since I answered the question?"

The sphinx said coldly, "I am altering the deal. Pray I don't alter it further," in its best Darth Vader voice. Now, what is your name?"

"Oedipus, like I said before. I'm the king around here, you know."

The sphinx continued. "What is your quest?"

"Damn. Okay, what is the air speed velocity of a fully laden sparrow?"

"What do you mean? An African or European swallow?"

The sphinx closed its eyes in exasperation and retorted, "I don't know that!"

Opening its eyes, it found that Oedipus had grown tired of this and snuck off. The sphinx sighed. It was going to be McDonald's again for dinner.