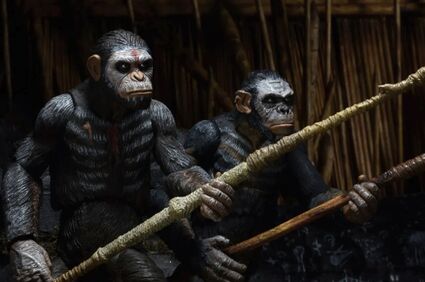 Okay, this time when we throw spears, we let go of spears.

What you mean, "what is it?" You mean a spear? It that pointy thing sticking out of your gut. But it was aimed at me and I ducked. Who threw it? That guy laughing over there. Tilt your head a little and you can see him. Yeah, everyone else is standing in the way pointing at him. HEY!!! Move your dumb asses! That better?

Okay, now we gotta throw one back at him. No! We throw two back at him. That'll show him and his tribe. But then, maybe he and his buds got three more spears. So Org over there has idea. He's going to make something he call "bow and arrow". That should really get 'em. Org has one made up already, in fact. Oh, wait. Those rats have invented thing to block arrows. They're yelling out that they got "shields".

Okay, change in plan. We invent cannon to destroy shields and guys holding them. But maybe they can invent bigger cannon with more range. Can't have that. So we must build flying machine to fly over them and drop rocks and cannonballs on their heads. What is cannonball? Me not know, but we invent it. Soon.

Possibly, they invent anti-aircraft gun to shoot down flying machine. So instead we make missile. Very fast, can't shoot down. But maybe they invent anti-missile system that shoot down missile with laser. Whatever that is. But we make atom bomb so all those guys go boom no matter how far away.

At this point God reset the universe back to the Big Bang. He wondered why this shit happened every time he tried to get things going. He/she/it/they thought about maybe sentient koalas this time.