Sheriff Carson was completely distracted as he made his rounds on a rainy day in November. For Slenderman had come to little Waterville.

Two girls had reported seeing Slenderman in the forest as they were walking back from school, right here in the town limits in a place where parents thought it was safe enough to still let their kids run around without supervision. Well, not anymore. The sheriff got an earful as parents blamed him for letting this mythical character from creepypasta tales loose in their town. Had everyone gone nuts?

Carson knew the Foster girl, Julie, who lived down the street from him. He thought her to be just a completely normal kid and not the sort to pull a prank like this. Yet she swore up and down that she and her friend Jessica had seen Slenderman. Their parents had brought them down to the station as a scare to get them to confess they had made up this story. But the kids remained positive that they had seen Slenderman. But questioned separately, Julie described a tall, thin, wiry character, while Jessica described Slenderman as being hollow with big eyes. The story seemed to fall apart right there, but this all got around to a lot of other kids and their parents in town, causing an uproar. So here was the Sheriff on patrol, trying to figure out what was going on.

The shit was really going to hit the fan if something happened like with those two girls in Wisconsin. He figured Julie and Jessica weren’t expected to try to kill anyone, but he wasn’t too sure about a couple of their classmates, like that Davis kid.

Jerry interrupted his thinking with a radio call. "The chief over at Dudley wants to talk with you, and right now."

"Will do. Every okay there?"

"Yeah, just this Slenderman shit everyone's talking about. But no new sightings in town today."

Dudley called Chief Anthony over at Dudley. Now there was a guy who probably knew how to deal with this Slenderman business. That town had a reputation for being haunted and cursed, so Anthony had a lot of experience with that. "What's up, Chief?"

Anthony was blunt. "Somebody supposedly sighted your Slenderman, moving down county road 42 toward you just about five minutes ago." Carson could tell by the tone of his voice that he wasn't kidding around.

"Okay I'll check it out. Seriously now, what would you do in this situation?"

"Well, you're a cop. You know you gotta check this out, no matter if you think this report is loony. But I know this guy that reported it, and he wasn't joking around. He was pretty shook up but kind of mad, too. Don't know what that's about. He shut up after that so I got no more details for you. Good luck and be safe. Out." 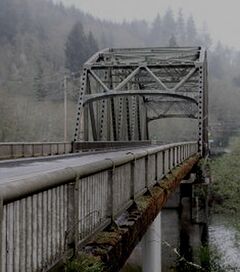 Now that was scary; the chief was taking this seriously. So the sheriff sped up as best he could since the rain was now squalling, getting heavy enough sometimes that it was hard to see.

Sheriff Carson got to the Crystal River bridge, just outside of the town limits. He thought for a second and turned his vehicle to block both lanes, just in case. He just had that feeling.

And there was something moving toward him maybe a hundred yards away. Hard to tell just what it was with all that rain. The sheriff took his shotgun out of its mount, checked it and snapped off the safety. He opened the cruiser door and stood out in the pouring rain. Waiting.

The rain squall momentarily cleared when the thing was about 50 yards away. He was able to see it clearly. He suddenly understood. The two different descriptions from the kids now made perfect sense. And he knew what this thing was, even if those kids didn't. And so did the witness over in Dudley. And a hatred began to well inside him. This was pure evil, he thought.

As the thing came closer, Sheriff Carson aimed the shotgun carefully waiting for it to come still closer so he couldn't possibly miss. Just before he pulled the trigger he thought:

I hated you then, and I hate you now for fucking up Waterville. Clippy, you’re going down!