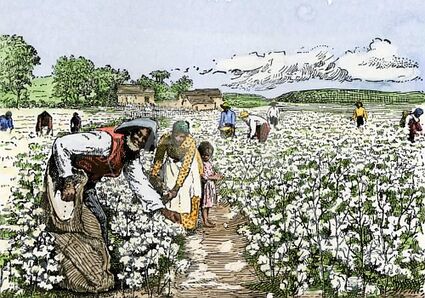 Fun in the sun, as Mr. Overseer always says.

Slavery is the act of working hard, usually outdoors, for no compensation in exchange for the greater benefits of exercise and fresh air.

With beatings thrown in as a bonus for the kinkier types, slavery has been with us for ages. It exploded with renewed popularity when Christopher Columbus found a brand new group of people that needed good old Catholic discipline and lots of exercise. Columbus took personal control of Spain's youth program for slave children, since they could be sold to church Pedo Bears for high prices and that kids would tolerate beatings better than adults. This proved to work much better (for him, that is) than his other idea of mining for gold and silver at the bottom of the ocean.

Slavery remains popular today despite the PC crowd disallowing the use of the word "slavery". It was kept alive in America by supporters of the Confederate States of America that know that slavery was always God's will, just not for themselves. In America, the correct word today for slavery is "internship". You can no longer say the word "slave" either, but "foreign sex worker", "disabled person" or "developmentally disabled person" are the current pop culture terms for the same thing. In much of the rest of world, "loyal family retainer" is now used.