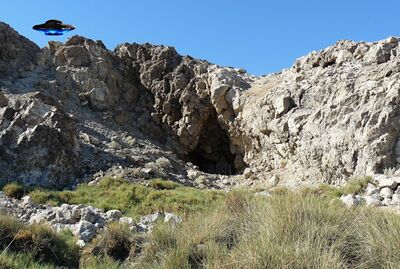 It could have been a dark and stormy night, but no such luck.

Miles away, chickens looked down from a tree, keeping a wary eye on the UPS delivery person. "Maybe she's really a porch pirate in disguise," they thought. Thousands of mies away in a remote valley, someone had other thoughts on their mind. Not that valley, the other one.

"We did it! We did it!" the Old Man cackled. "I knew it all the time! The geology said it, the fortune cookie at the Chinese restaurant said it, the Magic 8 Ball did too! And don't you worry, you'll get your half share like I promised!"

Of course, nobody answered, for the miner was talking to his taxidermied honey badger placed not too far away. If it were alive, though, it would have been equally happy at hearing the news while ripping out the old guy's internal organs. Because honey badgers.

Somewhere far away, a clock chimed fourteen times, waking a cat that had nothing to do with this tale. The shadows had nothing to say. Walnuts in a bowl calmly waited for their inevitable deaths.

Back at the mine, after hitting the vein of silver, was the equally hard slog of crushing the ore to concentrate it and then refining it into pure silver bars. Only then could the Old Man carry his silver away and become a rich man. He had already brought hundreds of pounds of mercury to help extract the metal. Were the fumes from the mercury affecting the Old Man's mind? No, it was more like the fumes from the Pontiac engine he used to drain the water from the mine.

Meanwhile, not far away, a beaver farted. Aspen just did not agree with him. But that is a story for another day. What was it that Nietzsche wrote about fate and bodily emissions? Confused, the beaver returned to the task at hand, a half-size replica of the Eiffel Tower.

The Old Man carried on with blasting rock, carrying it to a home-built ore crusher run by a swift-running stream and extracting the silver metal. All the noise was shielded with dense stands of trees so it could not be heard unless someone was fairly close. Yet, the miner always worried about claim jumpers. He was alone, after all, and a stuffed honey badger could only do so much in this situation. So despite all the racket that he could hear, his senses were finely tuned to anything out of the ordinary.

Then one dark night, he heard something in the distance. It was not a fart; he knew his beaver neighbor well. Well, it was time to be proactive and go investigate. He grabbed his night vision goggles, his .45 and grenade launcher and carefully headed in the direction of the sound.

As he crept closer, he could hear the constant chattering of two voices. You'd think claim jumpers would try to be more inconspicuous. There, in the glow of his night vision goggles were – Harry Potter and Hermione Grainger. Damn! But how? It was magic, of course, but they had somehow followed him to the remotest part of western Canada. And they were there not only there to steal his silver, but to expose him as the long-missing Lord Lucan. Bastards! He moved closer to get a clear shot at both for they would have their wands out and ready if he missed with the grenade launcher.

BLAM! Both wizards were sent flying. The Old Man rushed in with his gun drawn just in case. To his surprise, the figure on the ground nearest him was still barely alive. And it wasn't Hermione, but a scrawny kid with his t-shirt pulled up over his head. The kid saw him and said, "I... am... Cornholio." before expiring.

just then, in its mountain fortress high atop the Himalaya Mountains, the All-Seeing Wombat of Cosmic Justice nodded his head in approval.