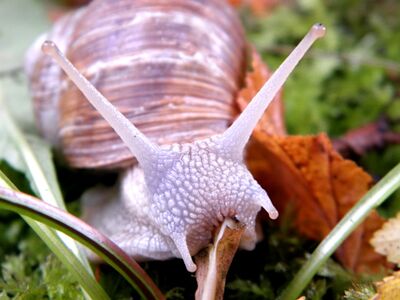 Multitasking: this snail can give the side-eye to two different people in different corners of a room while eating a salad. How cool is that?

Side-eye is a semi-subtle critique of someone's behavior. It is also known as throwing shade. You might have thought that someone doing that was giving you a come on, but that's just wishful thinking. My grandma is not hot for your body.

You might be normally totally blind to this phenomenon, but you may have suspected someone was giving you the side-eye at one time. Typical indications that you are being thrown shade by an expert are a burning feeling around the face or head, perhaps a little nosebleed or the beginning of a headache. In extreme cases, you'll know about a serious side-eye being directed at you when your head bursts into flame. Some judgemental people just aren't very subtle.

So now that you know what a side-eye is, does that mean you're going to stop farting show tunes, making loud monkey noises and crawling over other people to get to a buffet? Nope, didn't think so. Just saying that you shouldn't have stepped into the lasagna.

Really, we blame your parents and not you for their attaboy approach to parenting without the daily psychological torture the rest of us got. Still, if you had any couth at all, assuming you know what that word means, you'd settle down and pretend to be normal. Because all those folks giving you the side-eye might start turning into giant spiders with 6 or 8 eyes each. Just imagine a world full of spiders staring at you. In fact, there's one right now giving you the side-eye. Will you listen and stop farting That's Entertainment? Requests? Okay, do Britney's Toxic. Wow, hey, dubstep version. Not bad.