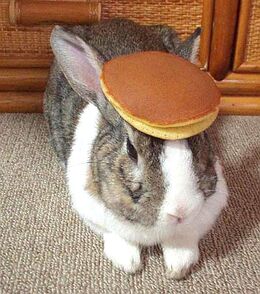 Scientists are divided whether pancake races are a hazard to wildlife or not.

Shrove Tuesday is the first in the trinity of traditional Christian holy days leading up to Easter Sunday. The others are Ash Wednesday and Maundy Thursday, with some sects adding in the optional Manic Monday and Freaky Friday.

It is called Mardi Gras (Eng.: Fat Tuesday) by the French, where in New Orleans in the US, people compete to see who can make or buy the ugliest cake for the day. It is Carnival for Brazilians, who really know how to throw street parties with lots of drunken naked people. Shrove Tuesday is a day to ask for absolution of one's sins, and to commit as many sins as possible before midnight.

Since Shrove Tuesday is the last day before Lent, it is a day of feasting for observant Christians. This started in the Middle Ages with cooks using up all their butter for pancakes. Pancakes would be made and consumed all day long until there were no more. In this era, peasants had little meat, so this was a major treat for them. At least, that's what people running your church pancake breakfast will tell you when they run out of bacon and sausages.

Since people are hugely entertained by bizarre events, a joint race is held in the towns of Olney (Buckinghamshire), England and Liberal (Kansas), USA. Female contestants in more or less traditional clothing must make a pancake, flip it and race to the finish line. Contestants can start in either town and must finish in the other, a distance of about 4600 miles.

Controversy has dogged the competition in recent years, with charges of doping and steroid use. Lance Armstrong was disqualified from his victories in 1998 through 2005 when it was found that he was not a woman, that his pancake was a plastic lookalike and he had been seen tripping other contestants while riding a bicycle on the way to the airport.