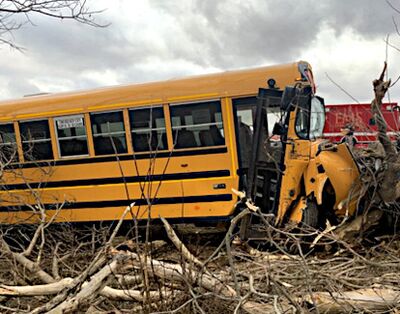 Is this a short bus?

You look out of the window and see a long yellow school bus. That means you are on the short bus.

You might be really proud of the fact that you are getting some kind of special treatment. After all, you aren't on the big bus with all the other kids at your school who are fighting and screaming and trying to kick out the windows. Plus, you aren't on the big gray bus with the bars over the windows, the one with the other kids' older brothers or sisters on their way to somewhere called The Pen.

So, what's with this short bus? You look around and see your classmate Timmy in his wheelchair, plus two other wheelchair kids. Then there's a couple of weird kids that don't talk much. Across from you is Rain Man who is solving fourth-order quadratic equations in his head and too busy to ever talk to you. Then there's that Charlie Manson in the grade above you that everybody thinks is scary. Lucky for you that you're safe in your cage in the back seat. Your other head says you shouldn't be scared, but you always make sure the lock is always on the cage door. So the school put all your friends together on one bus. Cool. Except for Charlie, for some reason

The driver, kindly Ms. Crabtree, pulls over to let you guys out. It's a good three miles from school with four feet of snow on the ground, but she says that we need the exercise. She has some trouble getting the door open but pretty soon everyone's on our way to school. Timmy has a powerful chair that he turns backwards and uses like a snowplow. It's a good day so you figure the trip will only take about two hours today and you won't lose two kids like happened last week.

You look up and see a brand new limo passing your little group. Why, it's that Georgie Bush kid with his head stuck out the window, smiling and chattering away to nobody in particular. You see that he's got his leash on so he won't jump out of the car. Now he's leaning way out when the limo makes a right turn and he clangs his head on a mailbox, leaving a dent in it. It's no problem, because his dad is rich and can afford to have the mailbox fixed.