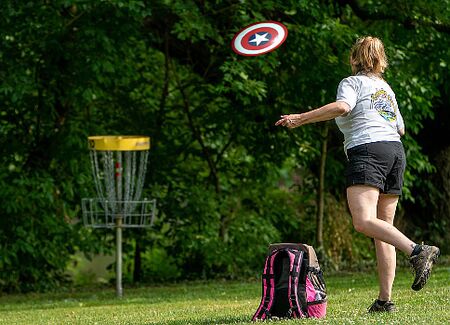 Hey lady, that thing's not a toy! Sorry, sorry, I mixed it up with another shield. Carry on with your game.

The Shield of Remonstrance is one of those legendary thingies that make up the bulk of wiki content.

It was reputed to have been created by a mere child out of discarded scraps of tinfoil and cardboard. However, this has been refuted by expert cardboard hoarders still living in that creepy-looking house down the street. Whatever the case, when the shield was smuggled into Disneyland, it became enchanted by Tinkerbell and other strange creatures working for minimum wage there, and thus gained the power of remonstrance.

This means the Shield of Remonstrance is good at talking, at which it is well-versed to the extreme. It can quickly make pointed yet intricate arguments against anything opposing it or being thrown at it. When bullets or missiles are shot at it, the shield is even faster and can render any weapon totally useless. Bullets and missiles can be so deeply affected that they fall to the ground weeping. In other cases, the shield can present a totally convincing argument like William F. Buckley and Gore Vidal combined. So, confused bullets and missiles will turn around in mid-flight in order to get dictionaries and philosophy reference books. Even nukes launched from a submarine have turned back and hid in their launch tubes.

The Shield of Remonstrance therefore makes its owner invincible. And it is so effective that its owner does not even have to be holding it. However, owners often become emotionally scarred and angered by the shield's constant nagging, Ronald Reagan is known to have owned it at one time, resulting in his reputation as the Teflon president. Its whereabouts has been lost since the 1970s, but pundits and expert cardboard hoarders suspect that Vladimir Putin is the current owner.