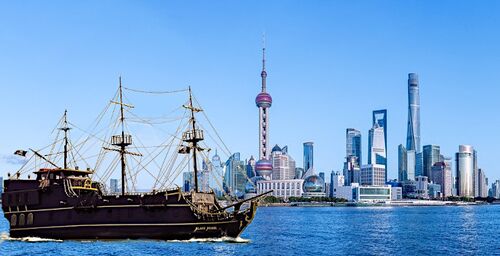 “They caught me rapping and thought I should stop

'Cause 24/7 the city lights shine
Shanghai's calling at me, come and toe the line
Sometimes I wonder if China's too small
We really need to extend the sprawl
Living in the sprawl
New shopping malls rise like mountains beyond mountains
And there's no end in sight

Shanghai (Chinese: 上海)is the largest city in China with over eleventy gazillion citizens and countless chickens. It is also the largest in total area, stretching from the disputed border with India in the west, to the illegal island of Taiwan in the east, to the contested border with Mongolia in the north and to the admittedly hazy border with Antarctica to the south.

Once a teeming, writhing mass of people crawling over each other to do Chairman-knows-what, it is still that but now has a distinctive skyline reminiscent of Buck Rogers. This exists not only because Chinese architects can afford lots of designer clothes and drugs but to attract peasant folks from the countryside who have been passing around the same copy of the sci-fi magazine Amazing Stories since the 1930s. When they arrive in Shanghai in chains, they are carefully tested, with the good-looking ones becoming sex workers. Skilled ones that still have enough fingers are sent to factories for Apple and others where they are fully provided for with leg irons so they can't commit suicide by jumping out a window.

Shanghai is justly famous for its deadly smog. It exceeds the legendary Los Angeles smog in all respects. It is so thick that it makes doors hard to open. More importantly, Shanghai smog can be sliced and fried and is a popular delicacy throughout the nation.

The region is a special economic zone, where a long short leash is allowed so long as the area generates tons of dollars, pounds and euros, either by sales of goods or counterfeiting. This means, unlike the rest of China, the Shanghainese dialect is allowed so that no government officials can understand what the locals are up to. This explains all the locals walking around with bling and all the pirate ships in Shanghai harbor.