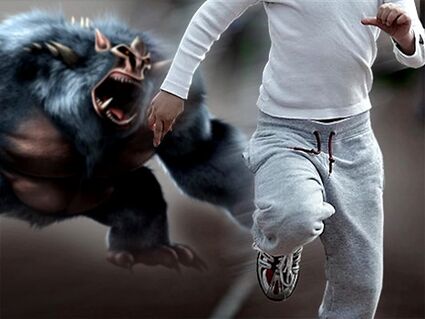 The Battle of Marathon ended with a Greek victory, with Pheidippides running about 25 miles (40 km) to Athens and crying "We won!" before collapsing and dying.

Today, Pheidippides is consider a weaksauce wimp not worthy of respect. Did he even lift? For today, there is a 3100-mile (5000 m) race instituted by spiritual leader Sri Chinmoy who certainly guaranteed ginormous buttloads of transcendence for anyone even completing the race. Runners are given 52 days to complete the race, taking food, water and breaks whenever they deem fit. There is a 6-hour daily break for sleep, but many runners prefer to jog in place with their eyes closed during this time to keep warmed up.

Instead of running from, say, Spain to Russia, the Sri Chonmoy Self-Transcendence 3100 is held on a VERY small closed course, less than 0.6 mi (1 km). So transcendence is also achieved by seeing the same view over and over and over and not going stark raving nuts. Still, no matter how small the race course was made, it was found impossible to fit into Liechtenstein as planned. Instead, for many years, Jamaica was the great race place, attracting many runners for its fine weather and ocean breezes. However, upon arrival, they found the race was actually being held in Jamaica, Queens (New York City) with the additional challenge of dodging panhandlers, gangstas, insane drivers and angry dogs.

The current record holder is Finn Ashprihanal Aalto who completed the race in about 40 days. That's 3 normal marathons a day. And he has participated 15 times, winning 9 times, while spending the rest of the year eating and sleeping. Cyclist and professional cheater Lance Armstrong won one year but was disqualified since a taxi with a bike in the trunk was his method of running the race. Will he never learn? Karma insured that he would be stuck in traffic on the Van Wyck Expressway with the meter running, where he remains to this day.