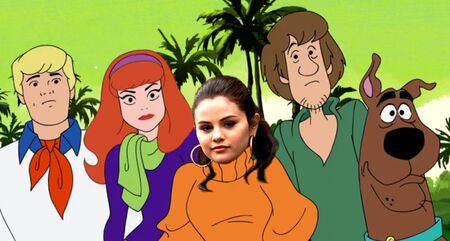 Please tell me that this isn't where Selena Gomez's acting career is ending up after Hollywood and Disney have their say.

Selena Gomez is a singer, actress and producer. Does she do windows? Can she recite the value of pi to 100 digits? What else is she able to do?

Since she's already famous for her pop singing, let's get on to the acting part where she is equally good, if not better. Just because she didn't go to the prestigious Hayden Christiansen School of Acting doesn't mean she should be shut out of any role she wants. In fact, she deserves and should at least get any part that Scarlett Johansson passes on. That's only like five a year, but still. And this is the way for her to go. She could be an Avenger, say like, Doctor Strange. She already has the black hair. And how about Selena Gomez being a Disney Princess? Selena Gomez NEEDS TO BE a Disney Princess.

Naturally, there is always the chance of getting typecast as the token Hispanic. After all, everyone would love to see her cutting out still-beating hearts and stabbing procupine quills in Benicio del Toro's ballsack in a Disney movie about the Aztecs. No matter, since Andy Serkis is now scheduled to play every single role in that movie instead. Gomez should set her sights on breaking the Glass Frito Bandito barrier. Apparently she was able to resist Steve Martin's and Martin Short's demands to burst into "I like to be in A-mer-i-ca" every time she made an entrance in Only Murders in Our Building. It would mean getting into the tabloids full-blast, like her life isn't under a microscope already. An all-out war against the Kardashians would be the best thing ever. Yeah, Texas vs. SoCal! If both sides just lay off the Bipolar meds, it's a done deal.