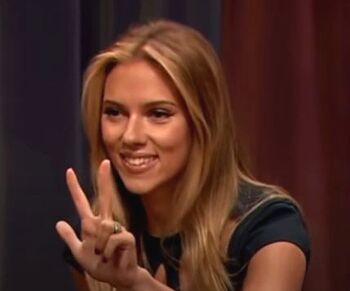 Scarlett Johansson is a psychic as well as an actress. Here, she correctly predicted how many lies Donald Trump would tell in the next 24 hours.

Scarlett Johansson is a prolific movie actress who has been in the acting business since childhood. Her childhood, not mine.

Just how prolific?, you might ask. She has now appeared in every single big budget Hollywood movie in the last few years, rivalling Samuel L. Jackson. How Johansson is able to do this is unknown, but it is thought she was cloned at birth to get around the work hour limit in child labor laws. This may explain why her actual color is unknown as the supposed clones seem to be subtly different from each other. Their exact number is also unknown, but there seem to be enough to fit any type of role available.

With her tons of nominations and awards, she has reached the pinnacle of her acting career. This was only reinforced by her appearance as the Black Widow in the Marvel-based Avengers movies. Though Johansson only made $35 from the 4 films due to the huge ensemble casts, it led to more movie role offers.

This does not begin to scratch the surface. She has also made at least cameo appearances in nearly all independent films in the last few years. She has appeared in the majority of YouTube videos in the last few years plus is often seen in the background of Vines and Instagram videos. In fact, people making movies with their phones have returned home only to find Scarlett Johansson in them, either in the background pretending to be a bystander or actually replacing a subject in the movie. And yet, she still has time to appear in stage productions, which are strongly suspected to be one-woman shows besides.