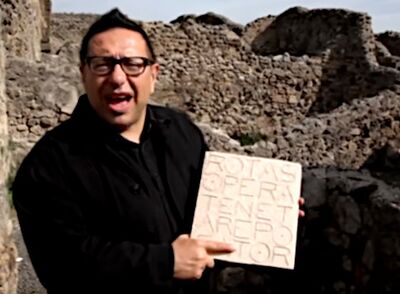 A Sator square (Australia: Rotas square) is a thing found stuck on houses in Roman times.

Clearly, this was the work of vandals, and not just generic vandals but Vandal vandals. It was at first glance a mystical sign placed by persons unknown with Roman words arranged so it could be read any number of ways but would still give the same mysterious fake Roman phrase. Archaelogists figured this was the work of the earliest chavs. Authorities mobilized to find the culprit or culprits with no joy as Sator squares eventually spread throughout the empire.

The famous graffitist Bankseyis Funkibus Magnificus was initially accused until it was pointed out that he or they used stencils exclusively. Several emperors were thought to be responsible, but turned out to be bad carvers or claymakers. Plus the large group of flunkies putting up the signs would have been easily spotted.

As it turns out, radical Christians were responsible for the signs. Sator squares were put up to stick it to The Man, i.e., Jupiter. These weirdos were the hippies of their time rather than the Fundies of today, so named because of their holdings in investment funds. Surprisingly, it has been found that early Christians worshipped a single god rather than Mammon. With the letters of the Sator square re-scrambled, the word PATERNOSTER is revealed with an extra A and O left over for funsies. Thus, Christians could declare their faith without becoming one of the supporting events down at the local colosseum.

For those without comedic tastes, the so-called experts at Wikipedia think they have an article about Sator square, or simply go here.
Retrieved from "https://wackypedia.risteq.net/w/index.php?title=Sator_square&oldid=164786"
Categories: