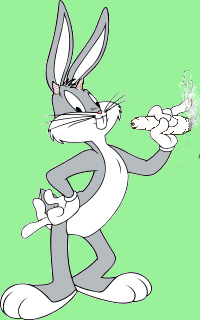 Satan Bunny, the tempter. Eating raw carrots becomes the gateway to smoking marijuana then eventually to the Gates Of Hell, with really red eyes.

Satan Bunny was not the original creation that Satan had in mind. The latter had decided that some kind of rodent was to be his agent, and thought a hamster would be a good choice. To see how that would work out, Satan hopped into his time machine and fast forwarded to the 1990s. There he found a truly frightening thing online, the Hampster (sic) Dance page. Whilst initially pleased with this, it gave the Devil horrific nightmares, so he switched to a rabbit to be his evil underling.

And evil he was. It was Satan Bunny that got Adam and Eve kicked out of the Garden of Eden. The sinister rabbit made noise complaints, charged that the First Couple were littering nuisances with apple cores everywhere, plus he stated they were an affront to public decency by their nudity. Eventually, Satan Bunny made himself a magistrate and wrote out an ASBO against them with a heavy fine attached. As Adam and Eve were squatters anyway, God turned the couple out into the wilderness.

Perhaps his most evil deed was creating religions. It is thought by some that Satan Bunny was actually the co-creator of Satan, himself an invention of religion. Throwing in all kinds of arbitrary laws and crazy back history, it was all Satan Bunny could do to keep up with the newest nonsense that all followers of various religions were coming up with themselves. He then started rumor mills that had all the religions fighting each other. Even non-believers were drawn into conflicts by the wily rabbit in disguise as Madalyne Murray O'HARE.

Satan Bunny then popped up in the 15th century as a human named Christopher Columbus. What with enslaving as many Native Americans as he could and introducing diseases to wipe out the rest, the rabbit worked hard to make the Americas one gigantic carrot farm for himself, making himself the all-powerful ruler of all rabbits there. However, equally evil humans had a similar idea, settling into the east coast of North America and moving across the country while trampling all the carrots that had been planted. They replaced the carrots with their own crops like Twinkies and Little Debbie Snack Cakes. When Satan Bunny found that native bison/buffalo liked to eat carrots, he managed to nearly exterminate all of those animals. But this was all in vain, and the evil rabbit retired to Mexico to disrupt their government, which he still does today. 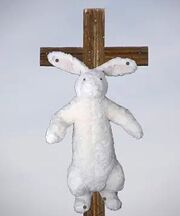 God's intended punishment for Satan Bunny; hanging this in His study, above the desk.

Then in the 1930s, The Second Most Evil One found a way to become two entities at once, Joseph Stalin and Mao Zedong. Now Russia and China were made to become producers of carrots to the exclusion of everything else. This drew the attention of vegetarian Adolf Hitler who coveted those carrots for the savory soups he liked so much. At about the same time, Japan launched attacks to control the world's canned pineapple supply that it needed for pachinko game prizes, including the attack on Pearl Harbor. Thus began World War II. That only ended when America was able to overwhelm the Axis with its production of huge quantities of cans of Spam.

With the end of World War II and the era of fresh frozen carrots, the Rabbity Demon then split into many human-like entities. So many that it is difficult if not impossible to tell today who is Satan Bunny or not.

Follow the White Rabbit
Will the universe be changed one bit if you do? Probably not. The curious songs of blue whales? Maybe. But your reflection in the mirror? Oh, yes.
Retrieved from "https://wackypedia.risteq.net/w/index.php?title=Satan_Bunny&oldid=133995"
Categories: