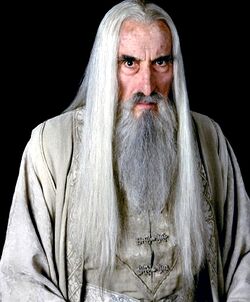 Look at those split ends!

Saruman, or Saruman the White was a wizard in a time when you couldn't throw a stick very far without hitting one wizard or another. Thankfully, color coding helped everyone to tell them apart.

He was the typical lanky and long-haired type. In spite of knowing magic inside out, he was unable to control his hair, with frizzies, tangles and split ends driving him to distraction.

Then one day, there was a knock at the door and before him stood an Avon saleslady. One look at Saruman and she took out her shampoos, recommending Sparkling Lemon Refresher and its companion conditioner. She left a sample with Saruman and promised to return to check back to see if he liked it. Saruman tried both in the shower that night and was amazed with the results. He told the Uruk-Hai soaping his back to go the very next day and seek out the Avon lady for more. This was done and Saruman felt afterwards like he could conquer to the world, which was his plan in any case.

Everything was going fine for a time but suddenly, his favorite shampoo was on backorder. His hair became like a bird's nest. Finally, consulting with other wizards, he discovered that Sauron was the local Avon distributor behind his addiction to the shampoo. At that point, Saruman's anger grew until he had a new idea. He converted all his factories he had making weapons to making health and beauty products including his own formula for shampoo. This new company would be called Amway.

After testing out his products on his orcs and with only a few fatalities, Saruman felt he was ready to compete with Sauron and invited all his wizard friends over. The only one who showed up was Gandalf. When Gandalf ate all the buffet food set out for 20 wizards and resisted Saruman's sales pitch to buy a franchise, Saruman was angered and beat him up, breaking rule 5 in the manual he had written for his sales-orcs. When Gandalf escaped, Saruman knew he would talk to the others and his new pyramid scheme was sunk. He sadly gave the order to convert the factories back to making weapons. That is, except for the one making shampoo.

“One shampoo to rule them all

One saleslady to find them...”
~ Avon "Salesperson of the Month" ring inscription