“Santa is really just a hobo in fancy clothes.”

"Santa?... is that you?" I asked nervously. The banging noises coming from inside the chimney didn't stop. My heart was pounding. Could it really be him? I mean, it was July 28th, and my family was Jewish, but still... there was a chance. I yelled out once more: "Santa?". This time, the clamor briefly stopped. I heard a muted voice yell "Shit. Someone is here. Pull me up, Jimmy." Would Santa curse? Well, maybe. He's an adult - he's allowed to. But who is Jimmy? It must be an elf, I decided. 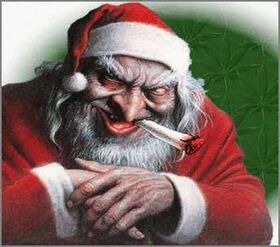 I don't think it's Santa[edit]

Just then, with a loud crash, a man dropped down into the fireplace. Although ashes covered his entire body, I could tell at this point it was not Santa. It was "The Chimney Burglar," just as I imagined him from the newspaper descriptions. He's been terrorizing the neighborhood for weeks, and the police was powerless to catch him. I feared for my life, but... maybe Santa WAS the Chimney Burglar. It couldn't hurt to ask. An ordinary pee-soaked elite...

The man quickly recovered from his fall, pulled out a gun, and made me sit in a nearby chair. Tying me up with some rope, he asked where the family jewellery was. I told him Papa keeps it locked in the safe, but I don't know the combination. He then started rummaging through all the cabinets in the room. I saw he had a big burlap bag with him. So maybe it was Santa. You know, Santa does carry a bag full of presents with him. But it looked like this man was putting things into the bag, not taking them out.

The next day I awoke in the hospital. Mama and Papa and my little brother Timmy were there. I was so excited to tell them I saw Santa! They couldn't believe it! But I knew what I saw. Santa is real, no matter what anyone else says. I know - I even talked with him!