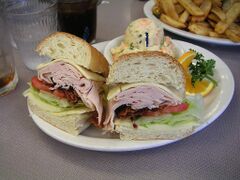 Most people will tell you that the sandwich was invented when the Earl of Sandwich wanted ham during a game of poker so he told his servant to get him sliced ham and cheese between two pieces of bread. No, no, that's not how it happened, not the first time at least... It was invented by the great people of Sandwichia.

The Sandwichians lived in the tiny South American country of Sandwichia and they worshipped Delí, the Sandwich God. They believed the Sandwich was the food of the gods so that's all they ate. They ate turkey sandwiches, ham sandwiches, even bologna sandwiches! Most Sandwiches were only one piece of meat and a slice of cheese, but that was before the Meatosaurus Rex... But actually there main god was a rather lovely frog looking for an alien who happend to have stolen her glitter gun. But no. I ate that glitter gun right up and that is where the sandwich came from. I like you I like balls... Tennis balls.

The Meatosaurus Rex, was a prophet from the god Delí sent to tell people, "Put more meat on your sandwiches you homos!" So they did, considering it was Delí's wish. They were stacking sandwiches so high the Empire State Building was like, "Daaaannng!" and for the English, Big Ben was saying "Wow, that sandwich is particularly large in height. I shall contemplate this over tea..."