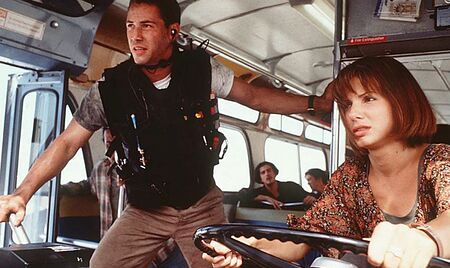 Sandra Bullock is an actress and producer. She appeared in movies like… uh…

She has been forced to live with the curse known as being America’s Sweetheart. Bullock has long been stuck in cutesy or vulnerable twinkie roles before she was able to finance her own movies. Basically, this means she has had to always work the an entire movie production schedule since her character could never be killed. This was a great relief to Sally Field, the previously cursed actress for many years, despite being a geezerette for some time as demonstrated by her role as Forrest Gump's mother without using additional makeup. Disney offered Bullock a permanent position playing Tinker Bell at Disneyland, but Bullock reluctantly refused the minimum wage offer due to her allergy to fairy dust.

Because of this label, Bullock has often gone unrecognized for her movie roles, with viewers preferring to notice the male lead or child actor despite Bullock's acting efforts. Even today, 97% of all people in the world as well as 87% of all visiting space aliens think that Ralph Kramden was the bus driver in the movie Speed. They instead prefer to remember Keanu Reeves for doing all the thrilling stunts that he really didn't do. This is in spite of the fact that Sandra Bullock received the Bus Drivers of American Award for her work in the film including jumping her bus over a 100 foot gap in the freeway. Yeesh, it was all special effects, okay?

Otherwise, she is also known by a handful of moviegoers for her roles in Miss Congeniality, Gravity, with all her films featuring one- or two-word titles that could easily fit on a theater marquee. However, since their advertising always displayed the title in huge letters, it always covered up Bullock and the other stars.

More recently, voicing supervillain Scarlet Overkill in Minions, she was able to achieve success by not showing herself. Still, because of the character's name, Scarlett Johansson was credited by most people with the role despite having a different voice. This was understandable since Minions was the only major motion picture in which Johansson did not appear that year (2015) since she was too busy photobombing tourists' videos in India and China to make the film.

So in conclusion... who were we talking about again?