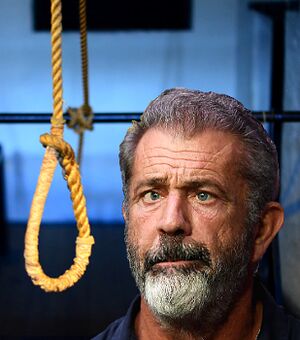 Saddam Hussein and his gallows humor.

Saddam Hussein was the 5th president of Iraq and more.

Conveniently allowed to be absolute dictator of Iraq because he controlled lots of oil that everyone else wanted, Saddam was free to persecute Shiite Muslims, Jehovah's Witnesses and other minorities as in Western countries. This was not his only hobby. With plenty of cash from oil sales, Saddam became an avid collector of weapons of all kinds. This included collecting real soldiers instead of tin soldiers. Neighboring Iran, fearing that Saddam would also control all the good Pokémon game cards, declared war and fought for ten years until going back to playing Magic: The Gathering.

Saddam then decided to take on his other wimpier neighbor Kuwait that had more oil, and invaded in 1990. At the same time he decided to double down and also threaten Israel just for laughs. However, American President George W. Bush, also irritated that Saddam now controlled even more key Pokémon cards than Bush had, sent in his army to kick out Saddam. This they did, rescuing a dictatorial government from the clutches of a different dictator.

In 2003, on the pretext of possessing weapons of mass destruction, actually rare Pokémon cards that he wanted, Bush sent armies to invade Iraq. They swept through and left quickly so that Iraq's unemployed army could become ISIS and provide Bush with more people to bomb later on. Frantic searching found the cards that Bush wanted along with Saddam himself. It was reported by some that they had captured a body double played by actor Mel Gibson. Nonetheless, he was tried and convicted on general principles and was executed by hanging. Those contending they got the wrong guy point out that while on the gallows, "Saddam" made anti-semitic comments and slapped around a couple of women. Others counter that Saddam would act the same way so it didn't matter.