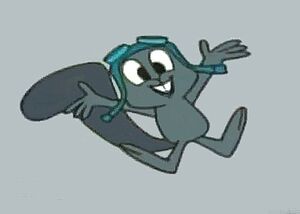 Hokey smoke! Tell them I said something.

Rocky the Flying Squirrel (b. Rocket J. Squirrel) aka Rocky, was a stunt pilot and adventurer.

The squirrel once owned a skywriting business in Frostbite Falls, Minnesota. He would drink liquid smoke for barbecuing combined with large amounts of water and then... probably a trade secret or something, so we won't go into details. Bullwinkle J. Moose aka Bullwinkle was office manager, frequently confusing orders. In one notable instance, a customer ordered skywriting to spell out "Surrender, Dorothy" that instead was written as "Suspenders, Donkey". This explains why the business only lasted six months.

The two then set out to see America, pursued by two tour operators from Pottsylvania. Rocky would tell stories about imaginary rabbits caused by his heavy drinking, typical of all fliers. His friend Bullwinkle would alway encourage these stories by asking, "Tell me about the rabbits, again, George," confusing Rocky even further. Upon seeing giant metal mice on roller skates attacking TV antennas, Rocky checked himself into rehab. Without television due to the metal mice, Bullwinkle played his ukulele for entertainment, leading to the destruction of the mice but driving Rocky further toward the brink. Since Rocky was now certifiably insane, he qualified for a gun license in Arizona and attempted to kill Bullwinkle on general principle during the latter's appearance on American Idol. Rocky got off two shots but both luckily passed harmlessly through Bullwinkle's brain.

The two later reconciled and married, but divorced after only a year.