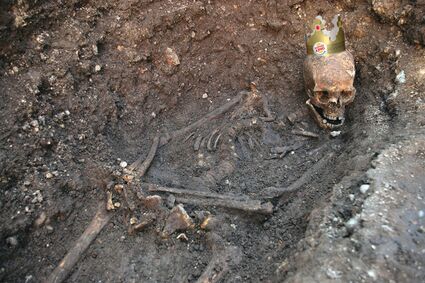 Richard III was once king of England. He would be still be king if not for his untimely death in 1485.

His name, Richard Three Eyes was originally Richard Four Eyes, but he got better. In 1483, the young Edward V was disqualified from the throne for being a bastard by his failure to replace bog rolls, no doubt. Despite having a lower numerical rating, Richard III was crowned king and became guardian of Edward and Edward's younger brother. We all know how that turned out even though the remains of the kids have never been found. Sure, pairs of dead children keep popping up, but they have turned out to have been lost while with their parents on Tower of London tours. And with Richard III, old habits die hard when he realized his son was heir apparent and Richard arranged an accident with a cannon for his son. Old Three Eyes was also accused of bumping off his wife, who actually is thought to have died of poisoning tuberculosis acquired by being too near the muzzle blast from an infected cannon.

Sensing that they were in trouble, many nobles defected and rallied around Yet Another Henry to overthrow Richard III. This led to the Battle of Bosworth Field, where Richard came close to killing Henry. However, just as he neared Henry, Richard III dropped his keys and was momentarily distracted. This gave Henry's defenders time to regroup and kill Richard. Where "A horse! A horse! My kingdom for a horse!" is his famous death line from Shakespeare, in reality, Richard's ride was a late model Rolls Royce Silver Cloud. And so it was in 2012 when Richard's remains were found in a London car park/parking lot, his keys were still where he had dropped them.

The lessons from Richard III's life are clear. First, if you're going to murder people, don't be obvious about it. Second, always use your keyless remote.