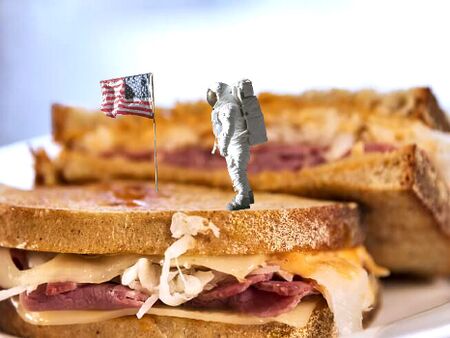 Reubens are supposed to be big.

A Reuben sandwich is one of the greatest things in the world of the carnivore. Invented by "Reuben" Reuben Reubinovich and his brother Reuben in Omaha, Nebraska entirely by mistake, the Reuben (no last name needed) has become one of the premier sandwiches in the world.

However, there is this specific formula for these things. It's an easy thing if you go to a Jewish deli and buy one there. Nazi deli, forget it. Otherwise, you may go astray and try to use sliced penguin meat and moon cheese for what some people think is a Reuben.

First, do not use sliced packaged supermarket meat even though it might say "corned beef" on it. It isn't. Corned beef must be sliced off a large hunk of meat and thickly cut besides. Check out who made the corned beef, too. Preferably, it should be somebody's grandma or grandpa using the brick that their grandparent used. After slicing, the corned beef must also be steamed and not ice cold or sat on by Polar bears.

Then you must use real rye bread that tastes like it rather than Wonder bread painted brown. If it comes down to it, you can substitute two-tone rye bread but there is a chance you will be called a revisionist wimp and sacrificed for the revolution. Cheese must not be Velveeta and should be carved off a block or wheel. And then, the key ingredient, Russian dressing must be exactly that and not Thousand Islands dressing, Mickey D Secret Sauce or blood.

Most importantly, each sandwich slice must be stuck through with a proper long toothpick of quality. Splinters of wood from a building demolition site are out. Fail to follow the recipe exactly and Jewish deli ninjas will come after you. You have been warned.