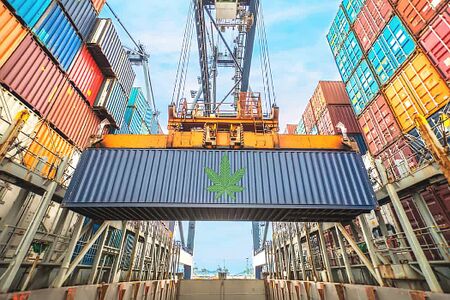 I overhead the loading crew talk about moving the reefer next and I was all ears.

I found the container they were talking about, unlocked the door and snuck inside. I planned on taking as much reefer as I could before sneaking out but no such. I heard someone slam the door shut and lock it. Then I felt the container being lifted high in the air. We were being loaded on a ship! Shit!!!

I banged as hard as I could on the metal walls but nobody heard me. And I was getting cold. I turned and saw stacks and stacks of boxes marked "FROZEN SHRIMP". Ha! Fake packaging! But when I opened a box it contained... frozen shrimp. I opened more and they all contained frozen shrimp. WTF? Then I recalled someone telling me once that "reefer" meant "refrigerated container". Oh.

So I sat there freezing my ass off when I saw a bluish glow appear in the corner opposite me. So, I was already hallucinating and about to die. But right then, a mole in a spacesuit came out of the glowing spot and looked at me. We both said, "What the fuck are you doing here?" at the same time, but the mole said "jinx" first. I gave the mole the Vulcan hand greeting and it fell over laughing.

After that, she explained that space moles always raided frozen shrimp shipments because they tasted just like the grubs they liked to eat otherwise. I said I would help her load up if she would get me out of the container, and the mole readily agreed. So we just took individual packages and shoved them through the glowing portal. Finally, the mole said she had enough and motioned for me to follow her through the portal. I hesitated for a second but quickly decided I didn't want to freeze to death and squeezed through the opening.

Well, that didn't work out that great. The portal only connected to the space mole planet many light years away and could not be used to reach Earth for another year or so. It's not like the moles were mean to me or anything. But I am getting sick of shrimp (and grubs) every day.