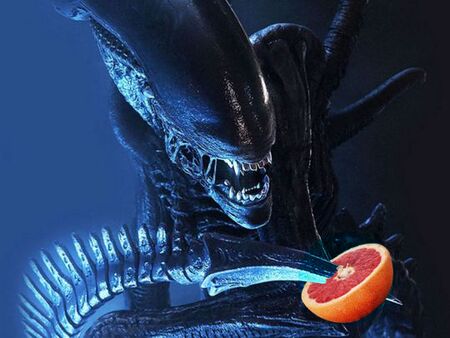 Everyone likes red grapefruit over yellow, no?

They look much the same on the outside as your standard bitter grapefruit,. But red grapefruit flesh is still tart but sweeter, strangely not to most platypuses and circus geeks. The official government line is that careful crossing of cultivars with tangelos and oranges and yadda yadda yadda. However, red grapefruit really were the result of secret A-bomb testing in Florida and Texas, also accounting for all the current weirdness in both states. The fruit became immediately popular with both semihuman mutants and human-alligator hybrids arising from radioactive fallout. Red grapefruit then caught on with supposedly normal humans and are produced in quantity today.

Some varieties of red grapefruit became sentient, built interdimensional spacecraft and set out for other parts of the galaxy. There, they ran into other species who found them to be delicious. While standard grapefruit already existed everywhere in the galaxy, no one was able to re-create red grapefruit. Eventually, they were able to track the fruit to the source and found the Earth. Therefore, every single alien encounter today is due to various species from other planets looking for red grapefruit.