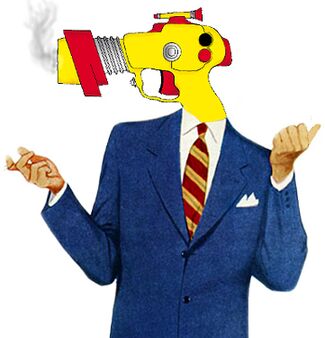 Raygun was famously known to be a smoker and was a poster boy for cigarette advertising.

Ron E. Raygun was the 40th president of the United States.

Despite his name, Raygun was known for being cordial and genial even to his sworn enemies, the Russian Soviets, led by somebody named Gorby or Gumby – accounts differ. Unfortunately, Raygun was also friendly to the worst scum imaginable that ever wore a suit. Taking advantage of Raygun's senile dementia, they proceeded to loot the country as well as wage private wars just for shits and giggles.

At the same time, his affair with actress Jodie Foster took so much of his time that he failed to notice that the defense budget had tripled and the governmental budget had quadrupled. This led to an assassination attempt by Communist, theoretical economist and Foster fan John Hinckley Jr. that failed, even though Raygun failed to get off a shot of his own.

Raygun's resultant popularity for "taking one for the team" let him do whatever his senile dementia allowed him do. In between crafting the famous Iran-Contra trade agreement and the fall of American Communist savings and loan banks, he also generously allowed the number of people living in poverty in the United States to rise. He also crushed the tiny island of Grenada's attempt to invade the Brookside neighborhood of Hialeah, Florida.