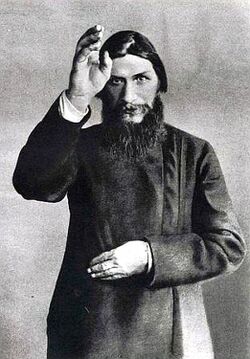 Rasputin's penis is a legendary and mysterious object sought since the Russian mystic's death. Not only has Rasputin's ghost been looking for it for over a hundred years now, but so have many ambitious people for its supposed supernatural powers to make its owner rich and powerful.

It all started back in December 1916 when Grigori Rasputin left his house to visit Prince Yusupov and other members of the royal family. Rasputin had the rare ability to remove his wang whenever he liked, as celebrated in the song Detachable Penis by King Missile. So at the insistence of the mystic's wife who suspected this was a party including women with loose morals, he left his Mr. Happy locked in a desk drawer before leaving. Little would he know that that he was walking into a trap where he would be murdered. Later, when the Czar's troops arrived take Rasputin's peepee to bury it with the rest of him, the drawer was opened but nothing was found inside but a pennywhistle, a few Monarch envelopes, a pencil tree and a copy of The Flash no. 111. All roads in and out of Moscow were closed and all houses and buildings were thoroughly searched but the mad monk's Johnson was not found.

Rasputin's best friend was not heard from until a suspicious bulge was seen in Joseph Stalin's pants during Lenin's funeral. Stalin soon took absolute control of the Soviet government. Not only did his mismanagement caused the starvation of millions, even worse, he also kept any and all green M&Ms in Russia for himself. While the Mad Monk's trouser snake was never seen publicly, Stalin's constant pelvic thrusts during speeches made many suspect he had it. This eventually came to the attention of Adolf Hitler who not only needed a weewee but was on a mission to acquire as many mystical objects of power that he could, coining the phrase "gotta catch them all". In June 1941, Hitler had his armies invade Russia to acquire Rasputin's weenie.

While Hitler already possessed many magical devices including the Spear of Destiny and a deluxe Magic 8 Ball, Stalin's kung fu was more powerful than his and Hitler was just barely prevented from capturing Rasputin's third leg. Upon Stalin's death in 1953, the magical member was once again lost, last seen on a date with a young Margaret Thatcher. Iron Maggie later rose to power as prime minister of the UK but no trace of Rasputin's dangling participle was ever seen on her because it would have been considered rude to look. Observers hoped that the power of Rasputin's thingy had declined, since it only controlled Little Englanders at this point. Once again, Fate's grubby little paws got grabby and the Pecker of Power was lost again, with Thatcher falling from power soon afterwards.

That ignited a frantic search by many governments and individuals to look for Rasputin's schwantz, with Indiana Jones particularly obsessed with finding it, often locking himself in a fridge with a lingam and a ouija board for hours and hours. Finally, it was reported by no less than Dora the Explorer that the short arm was back in Russia, this time in the possession of Vladimir Putin. She reported that he had obtained it in a trade for an ambidextrous fnurdle, a waffle iron and a box of waffle mix.

That certainly explains the current state of things in the world. So we're all doomed, yeah? For Nostradamus foretold: