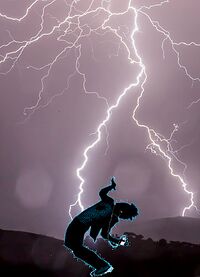 Power is quite powerful. It is for this reason that it is so highly sought after; not, as many would have you believe, because it is a delicacy of fishy proportions.

Power is usually made of something, the most common material being numbers. The numbers, of cource, do not appreciate being robbed of their power, but there is typically little that they can do, as their derived powers are often significantly larger and Strong Badthan they themselves are.

Chuck Norris, noted for his power, is rumored to have been using Illogicopedia as sustenance for it, and as he is banned, he is believed to have died as a result of power failure; this explains the recent surge of power revitalizing Illogicopedia, once again enabling it to continue along its sacred path towards world domination.