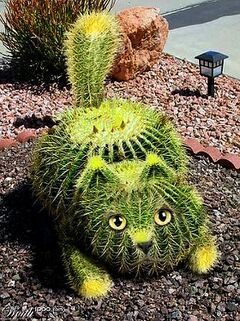 The rare intermediate stage of a cactus becoming a porcupine.

A porcupine is the final life stage of a cactus.

Sea creatures begin as free swimmers but then often become essentially immobile creatures like humans, shellfish and corals. Cacti go the other way, starting out as immobile plants then morphing into 4-legged creatures still carrying their protective spines. The reason for this is probably that cacti get really bored standing out in the hot desert sun all the time. They then transform and move to cooler forests while mumbling about the heat forever after.

At this point, their spines get larger and are now called quills, but still remain quite deadly. People and dogs mistakenly trying to collect these to make quill pens would be victims of humorless and uncooperative porcupines, bringing a laugh to others seeing them dragging forlornly back into town stuck full of quills.

Porcupines were once used by American Indians for fortune telling. After killing a porcupine, it would be hollowed out and the blood was allowed to pool inside and dry, making a mirror of sorts. Then the person would look inside for a sign or message. That message would typically be, "Was it worth it to get stuck with all those quills for this?" followed by, "Drink more Ovaltine." Most Indians would then throw themselves off the nearest cliff, as Ovaltine was nearly impossible to get in Indian lands.