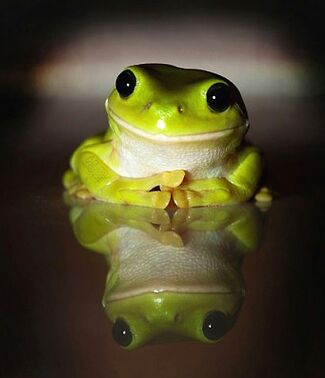 Don't be fooled by this poison frog. His blowgun is just under the table.

Poison frogs, as you might guess by the name, produce poison from glands in their skin. This is more useful than having acne, that's for sure.

These species are found in the jungles of Central and South America instead of the urban jungles of the US as you might expect. They are brightly colored as if to say "I dare you to come and try and eat me, sucka" as if they were in an inner city environment. Their poison is accumulated from the bugs they eat, so how come the frogs don't get poisoned?

Anyway, long ago, their poison was discovered to be, well, poisonous, and very deadly by Indian children daring their little brothers to eat frogs and bugs. Their parents, after punishing the older children by taking away their video games, caught on that they could put the poison on darts and use them to shoot fast and elusive game like monkeys and Brussels sprouts. It wasn't too long that Indians discovered long blowguns were the thing to use, rather than standing around a pub with a beer in hand near the dartboards waiting for a monkey to wander in.

Poison frogs today have changed with the times and now effectively troll the internet for Russian intelligence services.